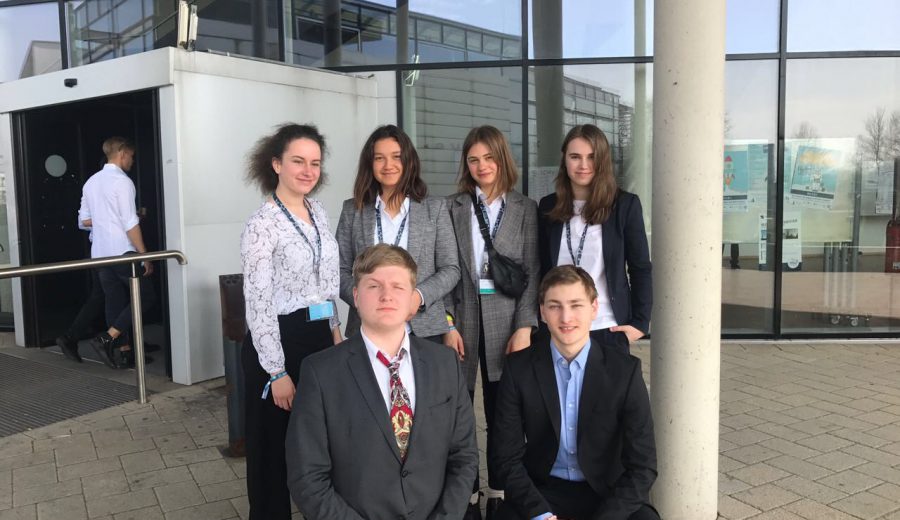 Hochrad students being parliamentarians in EYP’s session in Flensburg – working hard, with only insufficient sleep, but learning so much about the democratic decision-making process in the EU!

In December 2017 we, a mixed delegation of seven candidates from S2 profile courses Life on Earth and Global Village, were invited to the regional selection conference in Flensburg of the European Youth Parliament Germany (EYP), a programme where students of over 40 countries in Europe get together to discuss current politics in a parliamentary setting. Not only did we anticipate this invitation, we probably would have been frustrated if it hadn’t worked out for us, considering the amount of work and effort in time we invested into the 1,400 word application paper.

After long negotiations, due to two delegates not being able to participate and one of them eventually being replaced, we – now being a six member delegation – arrived at the Kurt-Tucholwsky-Schule in Flensburg, where the conference was going to take place. We were welcomed by an organising team, consisting of about twenty mostly German people. Although it was obvious, that they had the same mother tongue as we do, they refused to speak German with us throughout the whole trip.

After check-in and an informative lecture, basically telling us we were not allowed to leave the school building by any means, all participants, organisers, and chair-persons had to do team-building activities in the gym.

All delegates were introduced to their committee, for which we had to do some preparation work beforehand, and team-building continued until the end of the day in smaller groups: the committee, overseen by their chair-persons.

Everyone of our Hochrad-delegation was put in a different committee with an individual topic and leading question. The following day and a half all revolved around this one leading question and topic. In the committee groups, mostly being eight people and one or two chair persons, who guided the group, we had to come up with problems the EU is facing within that topic and resolutions on what the EU should do to abandon these problems and furthermore efficiently tackle the challenge of the topic. I, for example, was a delegate of the “Committee of Climate Change”, working on this question: “In the light of recent COP23 and the US withdrawal from the Paris Agreement, how can the EU ensure the efficient implementation of the Paris Agreement and show strong leadership in the global fight against climate change?“.

Committee-work was supposedly the hardest part of the whole session. It consisted of what felt like a never-ending day of hard work and brainpower. In order to come up with an appropriate resolution paper in only one day, we had to work morning until evening with practically no breaks. Taking into account that we had all slept on sleeping mats with a bunch of other people in a classroom the previous night, we were all wrecked by the end of the day and were happy when we were finally allowed to go bed by 11 pm.

But the hard work paid off: The next day everyone was given the final resolutions of all committees and accordingly had to prepare for the general assembly, which was going to start that afternoon. Each committee had to present their topic and resolution to all other delegates and the jury, concluded by a voting against or in favour of the resolution. Firstly, the resolution of the committee was read out by one of the committee’s delegates, followed by a defence speech of another delegate. This defence speech was then responded to by two attack speeches from two delegates of different committees, which the committee itself had to react to afterwards. The main part of the proposal consisted of the “open debate”, where delegates of all committees were allowed to pose questions about the resolution to the committee, to which the committee had to respond and conclude with a sum-up speech, followed by the voting that decided whether the proposal was getting through.

Each of us accordingly had to speak up in the general assembly (GA), which took place in the audimax of Flenburg’s university. Considering there were nine committees, who each had to follow the whole procedure described above, the GA stretched over Saturday and Sunday and we ended up having to leave to the station to go back to Hamburg still dressed up fancy for the GA.

During the session, although Committee work and especially the General assembly was fun and interesting, I was quite annoyed and exhausted by the tight schedule in combination with the rather uncomfortable sleeping situation and ensuing lack of sleep. Furthermore it was quite depressing having to stay inside 24/7, not being allowed to leave the building, considering it was warm and sunny outside.

Looking back, though, I’m happy that we took part in the session. Overall it was a lot of fun and interesting, and I think I can speak for the whole delegation that we are more than excited to be invited to the session in Cyprus next August.