Students standing on seven million cubic meters of waste – and enjoying it! 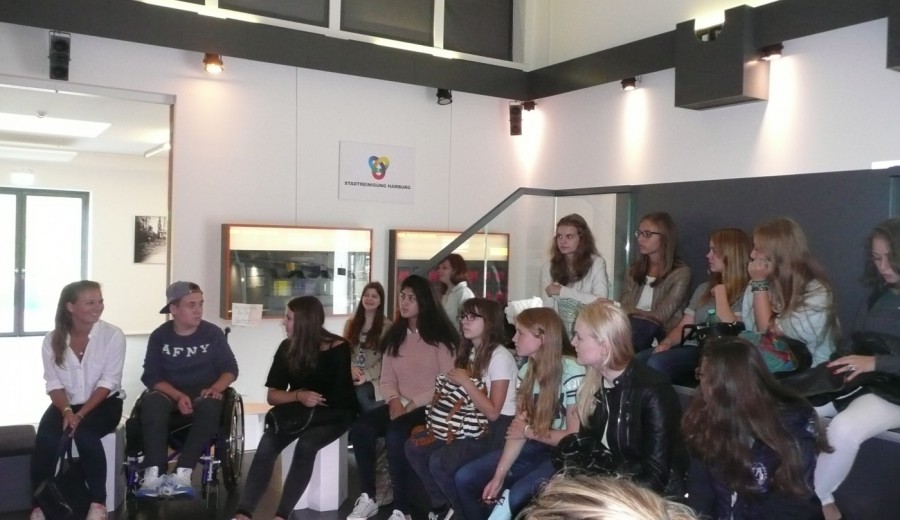 Hamburg’s largest umbrella covers about seven million cubic metres of toxic waste and standing on top of it can be frightening as well as enjoyable – an experience that S1 Life on Earth students had during their first day at school after the summer holidays.

Everybody got very excited when Mrs. Sassin told us that we were going to an excursion on our first day of ‘Oberstufe’, until we found out about the destination: ENERGY HILL GEORGSWERDER. Apparently it was a former garbage dump, somewhere over an hour away from our school. This made our motivation sink again.

rriving there it looked totally different from the expectations we had: The hill rises 40 meters above sea level, allowing us a breathtaking view to the city centre after having climbed on top of it under the supervision of our fantastic guide.
She told us about the seven million cubic meters of waste beneath our feet, which we had already learned about in a movie we watched beforehand in the newly built high-tech information center. It also gave information on the astonishing history and development of the energy hill: It started after World War II, where the area was used to dump and store rubble. With the Wirtschaftswunder or economic miracle the Germans produced more and more rubbish that needed a place: the former dump hill in Georgswerder. Decades later big industries needed a place for their toxic waste: once again the dump hill seemed to be a good solution, but it was only temporary because the toxic substances affected the drinking water causing health problems. Now the ‘Hamburger Stadtreinigung’ secures the site and the ground water is being decontaminated. Additionally they made an additional use of it by installing sustainable energy sources – a wind turbine and PV solar power modules.

Against our expectations this extraordinary excursion wasn’t only a very good introduction to ‘Life on Earth’, but it also made our first day after the summer holidays an unforgettable experience.

By Philine, Frigga and Teresa