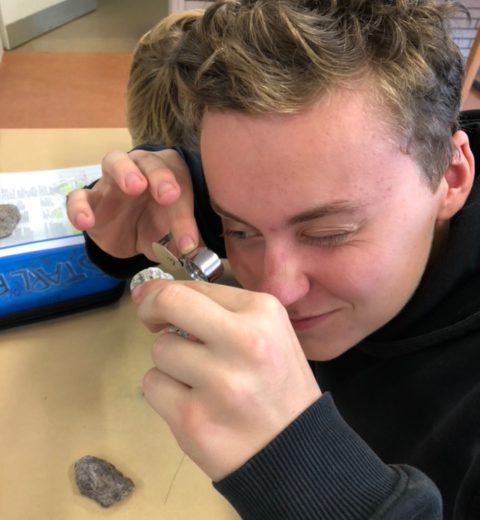 In the Geography lesson on the 7th of November, we learned very interesting things…

In the last few weeks we have dealt extensively with the topic of volcanism and tectonic plates. We had already learned what different layers of the earth there are, what they consist of and how they are built up.

But what made the lesson on the 7th of November particularly interesting was the fact that we were able to find out what stones consist of and where they come from by examining real rocks. Thanks to our teacher Mrs. Nolze, we were able to take a closer look at these real stones and experimented with them. We got to know three different types of rocks. We divided the stones into three groups according to their origin: magmatite, sedimentary rock and metamorphic rock. Each group had several characteristics. The sedimentary rock has a smooth surface, that is very grainy and that has layers. Then there were plutonic rocks (magmatite), which have several different colors, which we identified as different minerals inside of the stone. This type of stone also has a rough surface and consists of crystallized magma. The last type of stone that we studied were metamorphic rocks. These have a rough surface just like the other ones, a few crystals and usually signs of banding (stripes). With this information, we now know the differences between the different types of stones.

We also learned about the rock cycle. It shows that all types of rocks keep changing all the time. They change due to melting, cooling, compaction, erosion or weathering. The different rock types also have different densities. We determined the density of the rocks using a scale and a water container. We found out that metamorphic rock has the highest density.

This lesson was very interesting, and I think we won’t forget about the rock cycle because of all the experiments we did.

– Written by Mark and David