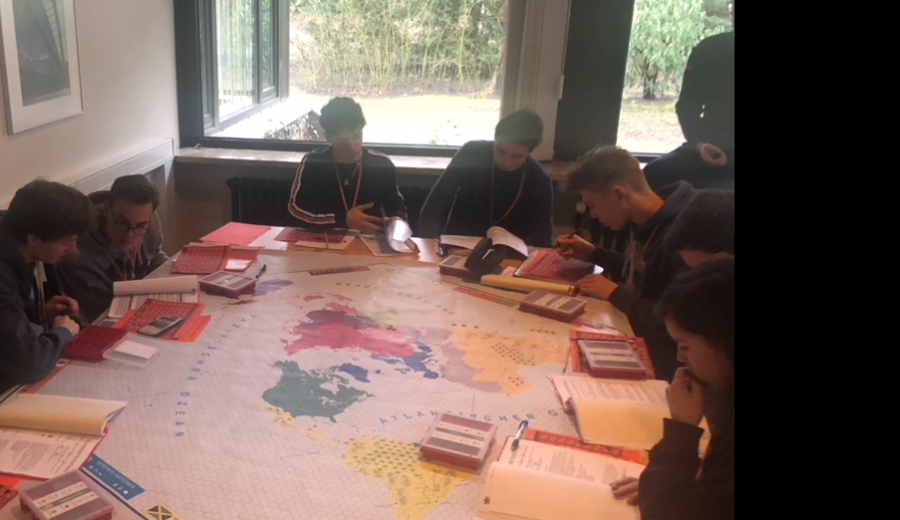 In a three-day course at the General Hospital of the Bundeswehr in Wandsbek, the two profiles Life on Earth and Experiment Erde participated in a simulation called POL&IS about politics and international relations. The goal of the simulation was to experience those problems the global community has to face – such as nuclear disarmament and global terrorism.

We represented the following regions: North America, China, Europe, Japan, Arabia, Africa, Russia, and India. Three politicians were assigned to each region. They tried to solve environmental problems and create economic prosperity. They founded alliances, signed treaties and negotiated about problems concerning the safety of their country e.g. piracy on the east coast of Africa or the rise of terrorist organizations in the Middle East.

In all these issues they were supported by international organizations such as the the United Nations, the World Bank, the World Press, and the NGOs.

Our day was structured in different phases. Each minister had the opportunity to openly or secretly negotiate deals with other ministers and each state was given time to parley with their neighboring regions.

Towards the end of each simulated POL&IS year (which took roughly one day), all treaties and alliances were evaluated and approved or declined by the UN general secretaries. The decisions made by each country had a global influence – and were then represented as “the news”. The reactions of the press, the demands made by NGOs, and the restrictions made by the World Bank were evaluated and were in one way or another important for the upcoming POL&IS year.

Each choice, each move had to be strategically thought through according to national and international interests and planned out thoroughly as any mistake or carelessness could lead to war, economic or environmental catastrophes in one or another’s region and an all in all negative represantation by the press.

In conclusion, taking part in this roleplay, we were given insight into how hard it is to ensure and maintain peace across the globe. Rescue missions, interntional negotiations, founding alliences, closing treaties, trading on the stock market and so much more was offered to us by this POL&IS experience.

A big thank you goes to the Jugendoffiziere for patiently supervising this simulation and giving us the room in the General Hospital in Wandsbek. Also a big thanks goes to our school to provide us with this opportunity!

for the World Press