Too much air pollution in Hamburg Harbour? 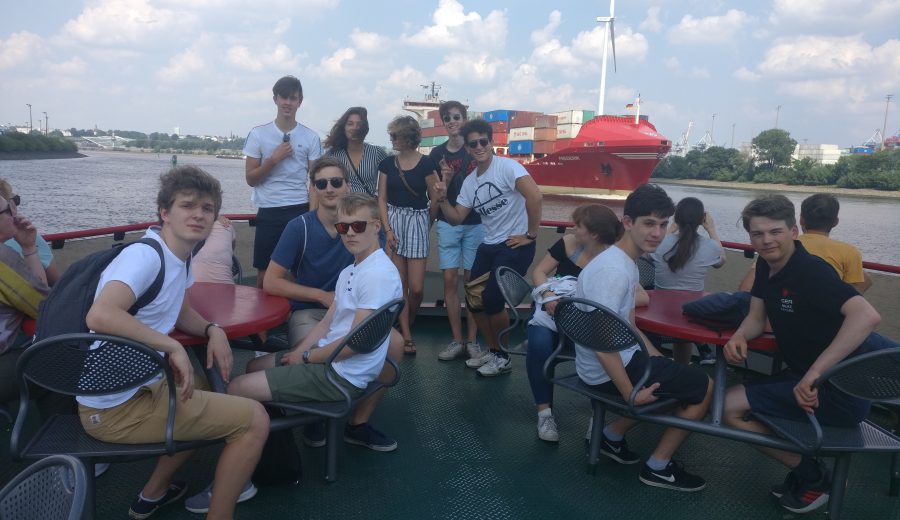 Life on Earth students learned about a method to reduce harmful GHGs by Becker Marine Systems and their LNG Hybrid Barge.

Thursday morning, the temperature is slowly climbing up to 30 degrees and we, Life on Earth, were looking forward to a yet relatively chill train ride to Harburg Rathaus. Eventually, after we had walked another 10min in the already blazing sun, we arrived at the headquarters of the company Becker Marine Systems. It is an international maritime enterprise that supplies the maritime industry with innovative solutions and products aiming to increase efficiency, sustainability and safety respectively to environmental aspects.

Technically this excursion should have taken place a little earlier, but since there was a little inconvenience we had to postpone the date of the excursion. Luckily they  were so flexible and kind that we were even given the chance to talk to young employees, that were still doing apprenticeship. There were about 5 apprentices and we got to talk to almost every one of them for about 20 minutes each. Some of them weren’t exactly chatty so we had to take over the conversation to avoid awkward silence. Nevertheless it was intriguing to hear how each one of them had a different story about how they ended up in Becker Marine Systems. As well as learning about their exact occupation. There was a computer scientist, an industrial business management assistant, a student, who is first studied machine engineering and then he specialized on ship building and there was also a designer who was responsible for example for the construction of container ship rudders. All in all it gave us a good overview how many different jobs can be done in such a big company and what kind of qualification is required.

After the first part of the excursion, where we found out about the different job opportunities and ended with eating an ice-cream shouted by Piet’s father who is the director of Becker Marine System, we made our way to a more specific project run by Becker Marine Systems, The LNG (liquefied natural gas) Hybrid Barge.

By founding an Alternative Energies department in 2011, Becker Marine Systems focused more strongly on LNG and other energy sources since their sustainability is of strategic significance. The Barge has been supplying power to cruise ships at Hamburg harbour since 2015. It is an innovative solution with the aim of improving air quality at harbour cities by reducing the emissions from cruise ships at port. The Barge has been shown to reduce the CO2 emission by 20% and the Nitrogen Oxides by 80% with no ancillary emissions.

Unfortunately, we missed the bus on our way to the barge and so we had to wait for another hour to catch the next one. To bridge time we went into a shopping mall close by, where we had some free time to eat or do whatever we wanted to. It was already after 12pm and extremely hot when we finally arrived at the barge.

The tour started with a little movie on deck, summing up the function and general information of the barge. After the movie we got split up into two groups where we got shown around. By now everyone was really sweaty and complaining about the heat. Especially the boys wouldn’t stop moaning, taking their height as an excuse of being fussier than the girls. Besides the almost unbearable heat and the extra hour of waiting, the tour was impressive, insightful and a worthwhile experience.